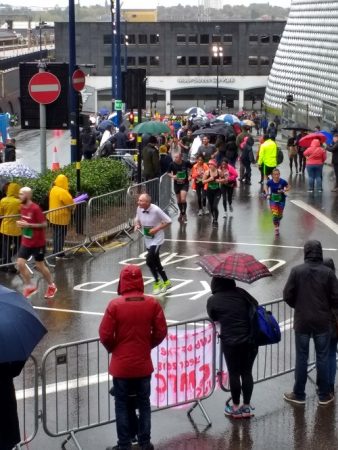 I had not intended running this year, but at the committee meeting in September ‘we’ decided that I should.  I would not be able to run until a few weeks before the event as Sue and I were off to Italy the morning after the committee meeting.  On return I managed some long runs and felt reasonably confident that I could get round. Sunday 14th October was wet, and cool if not cold.  I decided that I would run for the first few miles in an old jumper I could throw away and this was covered by a black dustbin liner to keep me reasonably dry.   To my surprise, it all went well.  The circuit had been nearly all reversed, which meant that what was previously a killer hill towards the end was now a fairly relaxed decent about a mile after the start.  I also chatted to another runner for about seven miles which helped.  I kept the bin liner on for about 3 miles and the jumper for six.  I think I managed my run better this year and felt a lot more comfortable, although very wet towards the end.

Thanks to all the members and one or two others who sponsored me.