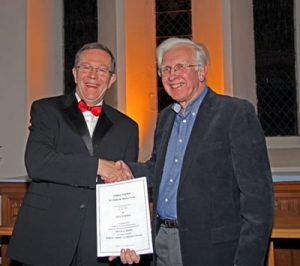 Neville Ward (right) and Guy Turner exchange a warm handshake at a concert given by the Bingham and District Choral Society at St Mary’s Church, Radcliffe-upon-Trent on 21st November 2015.

Neville formed the choir in 1972 and continued as its Musical Director until his retirement this year, when Guy was appointed to take on this role. Guy is holding a copy of his settings of Three Poems by W.B. Yeats, which he composed at the request of the choir as a tribute to Neville’s outstanding leadership over 43 years. The work was given its World Première at the concert, to the delight of the audience and to Neville in particular, who commented,

They are so skilfully composed and show such a sensitive and expressive response to the text. They will certainly provide a valuable addition to the choir’s repertoire and we feel privileged to have been present at their first public performance.’