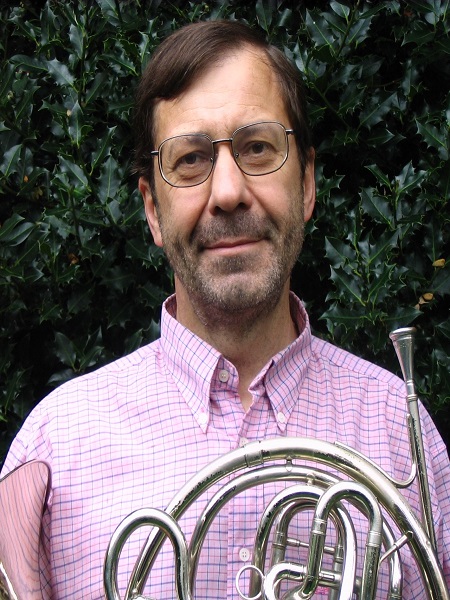 Originally from Bath, Robert is a Graduate and Fellow of the Trinity College of Music, London.  He studied horn with John Burden, former principal horn of the London Symphony Orchestra and top session player – the John Burden Horn Quartet can be heard at the start of the Beatles’ Sgt Pepper’s Lonely Hearts Club album!

Robert has appeared as a soloist across the country including in London, Somerset, Essex, Suffolk, Norfolk, and the East Midlands.  He has performed concerti by J S Bach, Mozart, Haydn, Telemann, Schumann and Richard Strauss, and also Benjamin Britten’s Serenade for Tenor, Horn and Strings, becoming something of a champion of the horn and new music for the horn along the way… He has had music written especially for him, including Andy Evans’ Horn Concerto which he premièred in 2009 at the Albert Hall, Nottingham. Andy said that he wrote the piece ‘to showcase Robert’s lyrical and sensitive playing, that I have listened to over many years’.  Robert was invited to play the horn obbligato in A Celebration of Psalms, a new choral work composed in 2013 by Burton Joyce based David Machell, who then wrote a Horn Concerto for him.  Robert gave a “bravura performance” at its première in St Mary’s Church, Nottingham in July 2018.   He is looking forward immensely to playing the horn obbligato part in Guy Turner’s Lux Aeterna with the B&DCS on 17th November 2018.

As a busy freelance musician, Robert plays principal horn with the English Pro Musica, Lincolnshire Chamber Orchestra British Philharmonic Concert Orchestra, National Festival Orchestra (including ten years with the International Gilbert and Sullivan Festival at Buxton’s Opera House), along with numerous other professional orchestras, and has been a member of the Southwell Festival Sinfonia since its inception in 2014, under the baton of artistic director Marcus Farnsworth.  Robert enjoys chamber music, performing with the Hough Ensemble (a piano and wind group) at a variety of venues, including Nottingham’s Theatre Royal, Worksop College as part of their Worksop Music Concert Series, Grantham Music Club and Bingham Community Arts. He also regularly gives horn and piano recitals with Antony Clare.

The year 2018 heralds Robert’s 25th anniversary as Music Director of the Nottingham Concert Band, a thriving community band based in West Bridgford.  They are fresh from their tenth season of Proms in the Park, having celebrated Armed Forces Day in Bridgford Park on 30th June 2018 in collaboration with Rushcliffe Borough Council.  He is currently grants and donations officer for the British Horn Society as well as being a member of the executive committee, and has been active in co-organising a number of BHS national festivals, most recently in 2017 in Glasgow: this year’s festival is on 21st October 2018 in Cardiff.

For relaxation, Robert and his wife Ann enjoy walking their greyhound Mr Piper by the River Trent, and tending their allotment.